The McDonnell Douglas F-4 Phantom II is an American tandem two-seat, twin-engine, all-weather, long-range supersonic jet interceptor and fighter-bomber originally developed by McDonnell Aircraft for the United States Navy. Proving highly adaptable, it first entered service with the Navy in 1961 before it was adopted by the United States Marine Corps and the United States Air Force, and by the mid-1960s it had become a major part of their air arms. Phantom production ran from 1958 to 1981 with a total of 5,195 aircraft built.

Development
In 1953, McDonnell Aircraft began work on revising its F3H Demon naval fighter, seeking expanded capabilities and better performance. The company developed several projects, including a variant powered by a Wright J67 engine, and variants powered by two Wright J65 engines, or two General Electric J79 engines. The J79-powered version promised a top speed of Mach 1.97. On 19 September 1953, McDonnell approached the United States Navy with a proposal for the "Super Demon". Uniquely, the aircraft was to be modular, as it could be fitted with one- or two-seat noses for different missions, with different nose cones to accommodate radar, photo cameras, four 20 mm (.79 in) cannon, or 56 FFAR unguided rockets in addition to the nine hardpoints under the wings and the fuselage. The Navy was sufficiently interested to order a full-scale mock-up of the F3H-G/H, but felt that the upcoming Grumman XF9F-9 and Vought XF8U-1 already satisfied the need for a supersonic fighter. 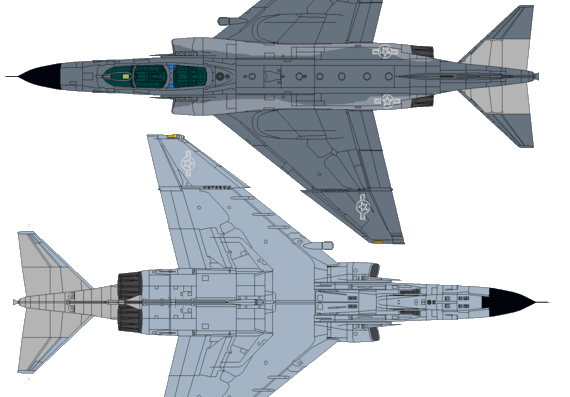